Sri Lanka was ranked as “the best country to visit in 2019” by the Lonely Planet.

OUR HOLIDAYS IN SRI LANKA

Whether travelling with family, on honeymoon, or a daring solo, Sri Lanka offers so much variety to suit every taste.  Discover hidden territories off the beaten track from lush forests, mountains & tea plantations to cities full of culture and heritage to wildlife parks and remote beaches.  Why book with Footloose? We have our very own specialist on the ground who will help us tailor your holiday into your own bespoke adventure to suit you and your budget.

We have included a couple of  tours in this section to give you a flavour of what is on offer.   However, we specialise in tailor-made holidays and want to hear from you so we can find out more about what your dream holiday would look like so we can design it for you with our Sri Lankan specialist who lives and breathes the country based on the ground. Pop into our office and we can skype Hashini together to find out more.

WE ARE REINVENTING TRAVEL IN SRI LANKA

When we say “reinventing travel”, we mean that we want our clients to know first-hand what to expect in a destination. The best people to get this information from are the people on the ground who live and breathe a country.  They are the ones with true in-depth knowledge and are kept up to date with fantastic new and innovative things for our guests to do.  This regular contact with our ground team is what makes a tour with us so special.

Below are some examples of the accommodation on offer in our Sri Lanka tours . We have all levels of accommodation available from standard to superior, depending on the experience you are looking for.  We also have unique local accommodation used by scientists studying wildlife where you too can stay for a  few days, take part and make a difference.  Remember that there are lots of options available, and after we discover your likes and dislikes, we’ll help you find the perfect boltholes for your Sri Lankan escape.

The weather in Sri Lanka is dictated by two monsoon seasons which bring rain to the west and south-west coasts from May to September (South west Monsoon); and the east coast and northern region between October and February (North east monsoon). The rest of the year is sunny and dry. Temperatures are fairly constant year round, with coastal regions enjoying average temperatures of 25-30°C and the highlands 15-18°C on average.

Unlike many other Asian destinations, Sri Lanka can lay genuine claim to being a year-round holiday destination. You just have to know which side of the island to focus on in any given month, and this is never more important than when planning your beach destination.

In the north and eastern coastal regions of the country, the weather is influenced by the north-eastern monsoon, which brings wind and rain between October and January, and drier weather between May and September. 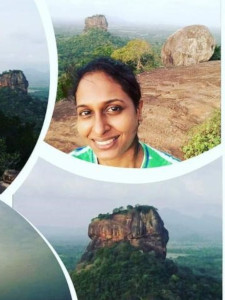 Meet Hashini – an explorer, hiker, foodie and an extreme adventure enthusiast. A glacier hike in Iceland and skydive in Nepal tops her latest travel diaries.  Born and raised in Sri Lanka, Hashini has a wealth of knowledge to help create your perfect Sri Lankan adventure. With 10 years’ experience in travel and consulting, Hashini enjoys her time designing unique holiday getaways featuring the best that Sri Lanka has to offer.  Her passion for life and adventure comes through in every tour that she helps create.